In many areas the trail uses different methods to indicate the trail due to terrain such as on rocky outcrops where there are few trees to blaze, where cairns of rock are built to mark the route or in towns that have their own trail marking systems like Elliot Lake.

Samples of various blazes you may see at an access points. 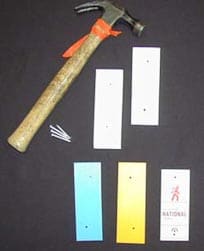 The Voyageur Trail is a true wilderness trail. Some remote or little used sections may be difficult due to fallen trees or regrowth. Use at your own risk. The VTA is a non-profit, charitable organization. Reg. #119261923RR0001.

Made with ❤ by Jeronamo Solutions